Chopping vegetables is not a kitchen task that’s reserved for top chefs from television or a fancy restaurant.  It’s something we all do quite often in fact.  Of course, any sharp knife can cut most veggies, but after a long, hard day, it’s nice to have the right tool for the job…and that’s a good nakiri knife!

Nakiri knives are the best tool for the job for several reasons, and the Japanese have known this for a long time.  But, the secret’s out!  And, the best nakiri knives are readily available for anyone to purchase.   Just see our top 10 list below to realize that most of the popular kitchen knife brands are all making them.  You could buy any one of these today on Amazon and have it in your kitchen in just a few days.

The long, flat blade on a nakiri knife make it especially well-suited for chopping vegetables.  It’s perfect for cutting long veggies in a single chop, but also great for a push or pull cut into squash and even some harder vegetables other knives are good at.  When you a look at the shape, you can see how easily your fingers will fit around the handle with no need to fear busting your knuckles on the cutting board.  The best nakiri knives are also known for being very good for julienning veggies.

Just because they’re are many nakiri knives to choose from, it doesn’t mean it’s easy to find the best one.  Of course, if you already have a set of knives, finding one that closely matches those is a good idea.  But, for those of you that don’t, here is our top 10 list, showing our favorite nakiri’s available today.

Our Top Nakiri Knife Picks for 2022 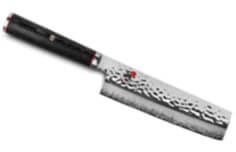 if you’re looking for a bit more detail than our top 10 list above, you’re in luck. Below, you’ll find comprehensive reviews on each of our 3 favorite nakiri knives.  You’ll learn what materials they’re made of, their top features, and what we think sets these knives apart fromt he others on the list. 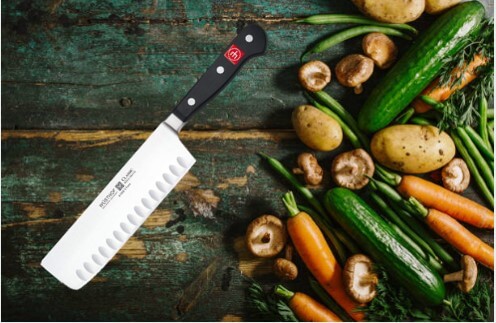 Just like nearly all Wusthof knives, their Classic series Nakiri is made of high quality materials and well-respected in the industry.  Compared to the others on our list, this Wusthof vegetable knife is priced below the rest of the market and is quite a deal!  It’s not some cheap piece of junk…It’s well made, fully forged, and produced by one of the world’s oldest and well-known knife makers.  If you’re looking for the best nakiri knife, buy this knife today! 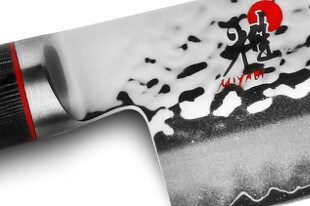 This nakiri knife is made using a strong and popular SG2 Japanese super steel.  This steel is only used on very high-end knives as it’s ultra expensive and very exclusive.  For those that don’t know, Miyabi comapres with Shun, and this is one of their top-of-the-line options. 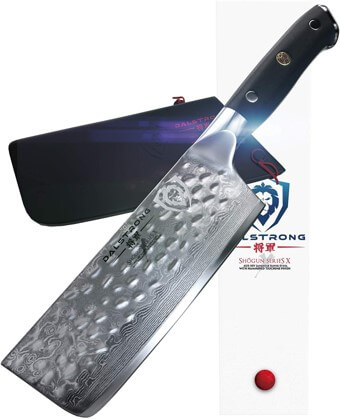 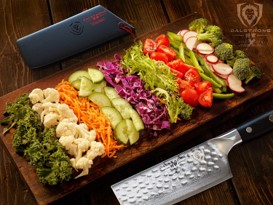 Who wouldn’t like this knife?  It’s beautiful!  It’s also made of Japanese super steel, is fully forged, has a full tang, has great edge retention, and uses an ultra-premium G-10 handle.  The hammered finish and Honbazuke sharpening put this Dalstrong knife over the top! 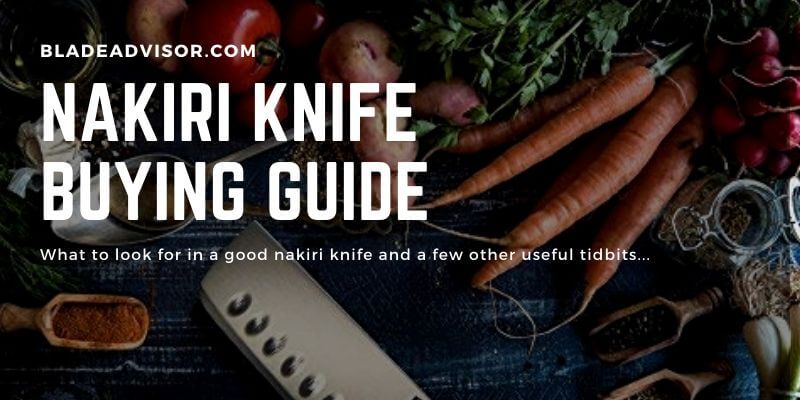 Perhaps you’ve never even seen or heard of a nakiri knife and you’re wondering what makes it the best knife for cutting vegetables.  I don’t blame you.  Up until a few years back, along with the internet’s help, nakiri knives weren’t as popular in the United States.  They originally derived from another one of the traditional Japanese kitchen knives, the Usuba.

Historically, the Usuba uses a single-bevel blade (only sharpened on one side) and requires much more skill when using or sharpening it.  They are expensive and almost used exclusively in professional kitchens only.  When comparing a nakiri to an usuba, you’ll find that a nakiri is lighter weight, has the more “Western” double bevel, and it’s easily utilized, even by beginners.  In our opinion, this makes a nakiri so much more useful for most of us.

Another Japanese knife, the santoku, is also similar to the nakiri.  In fact, a nakiri knife is basically a santoku knife without a point and a flatter blade.  This makes it more useful in a wide variety of applications in the kitchen.  It’s built to slice, dice, chop, and also cut meats, whereas the nakiri is a focused tool, specific for cutting veggies.

What Makes a Good Nakiri Knife?

There are several things you should consider when looking to buy a nakiri knife.  And, to be clear, these are exactly the same criteria we used when selecting our picks for the best nakiri knife above.  They’re not a lot different than what you should look at in most kitchen knives.  They are include: blade material and finish, the manufacturing process, price vs. performance (value to the consumer), and reputation (how does the knife fair in online feedback and reviews?).

But, before we cover each of these in detail, the very first thing that you’ll use to narrow your search is likely your budget.  Nakiri knives range in price from relatively inexpensive (around $50/ea), and go up to outrageous in price, including some that are several hundred dollars each.

One of the biggest differences that you’ll noticed between a very cheap nakiri knife and an expensive one is the material and finish on the blade itself.  The main reason is because good knife steel is expensive and high-end finishes like Damascus patterns and hammered finishes can be very labor intensive and expensive to manufacture.

So, what should you look for in a blade steel on a nakiri knife?   Of course, this will depend on your budget.  If you have the money and desire to buy the very best nakiri knife at any cost, we suggest you look for SG2, the same steel that our #2 choice, the Miyabi Birchwood Nakiri uses.  But, assuming most can’t afford that, or just don’t want to spend their money on such an expensive knife, consider finding steels like VG-10 or AUS-10V which are very similar to each other and are more common, yet very good kitchen knife steels.

In addition, most Japanese knives, and nakiri’s are no different, usually include options with some sort of blade finish or design.  As you can see in the one pictured above, there is both a Damascus pattern (folded layers of steel) and a hammered finish.  The hammered finish is multi-purpose.  It’s beautiful, but also acts as a low-friction food release from the side of the blade.  Not bad, huh?

Most world class knife manufacturers hand make their knives, which helps with details and quality.  There’s no quick, mass production to just get product out the doors.  They have skilled artisans that take their time through dozens of steps to ensure a quality product reaches their customer.  If you can afford it, this is the way to go…both our #1 and #2 picks above follow this guidance.

Besides who makes them, how they’re made matters too.  Like all kitchen knives, nakiri’s can be made by either forging or stamping steel into a blade.  We encourage our readers to strongly consider forged knives as they are typically higher quality and will last longer than a stamped knife.

Price Per Performance – Is it a Good Deal?

Sometimes we see consumers just blindly saying things like “it’s more expensive, it must be better” or “you get what you pay for”.  While both of these can be generally true at times, it’s not always the case.  There are instances where kitchen knives can be sold through different distribution channels that increase their mark-up, and in other cases a manufacturer might just offer better discounts to build a customer base.

After you find your budget, the best thing to do is to start identifying what’s important to you.  From there, you can check these items off your list one at a time until you find the best knife for you.  As an example, let’s say you have $100 to spend on a nakiri knife.  Next, you want to ensure you find a forged knife.  What next?  Perhaps you want to choose a Japanese super steel like VG-10 or SG2… and so on.

You’ll soon find out that if you don’t mind knives that are mass produced in China, brands like Dalstrong will have good knives at cheaper prices than someone like Shun who hand makes all their knives in Japan.

Reputation – Are Past Customers Happy With Their Purchase?

We say this all the time, but it’s true.  We live in such a great buyers market.  As consumers, we can hold manufacturers accountable for their quality and workmanship easier today than ever before.  You can literally find hundreds or thousands of product reviews on nearly any specific knife.  Between that and pages like the one you’re reading right now, we’re more educated buyers now.  We can dodge poorly made products and capitalize on deals others have found previously.