Both Chicago Cutlery and Wusthof are well-known kitchen knife brands. There is some overlap between them, however, there are also quite a few differences. For example, Chicago Cutlery focuses most of their efforts on affordable kitchen knife sets, of which they have several. Wusthof does a fair bit of this as well, however, a similar knife made by Wusthof will typically be made with higher-end materials and cost you significantly more to buy.

Whether you just want to be able to make dinner with a nice, sharp knife that won’t dull too quickly, or you want to impress your friends with the best of the best in German-made knives, these two brands have something for you.  By the end of our comparison, you should be able to decide for yourself if Wusthof is worth the extra money to you. 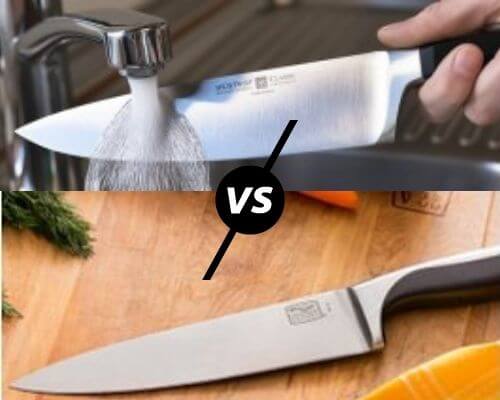 In order to make an equitable comparison between Chicago Cutlery and Wusthof, we’ll pick a similar knife set from each brand and compare the materials, build quality, and feedback from online reviews.  Hopefully this comparison will help you understand the similarities and differences between the two so you have a better feel for which better fits the needs in your kitchen.

Chicago Cutlery has been making affordable kitchen knives for the average consumer for 50+ years, and they’re a recognizable name in the industry.  Their knives a good and their lifetime warranty proves the company stands behind them or they wouldn’t still be around after this many years.  Their focus remains on providing knife sets for the masses, including both forged and stamped knives.  For keep prices low, their kitchen knives are made in China.  We have a very comprehensive Chicago Cutlery review if you’d like to read more about them in detail.

To compare against Wusthof knives, Chicago Cutlery’s Insignia II is probably the best contender based on similarities and the look & feel of a good, forged kitchen knife that comes in a large set.  The Insignia II also happens to be our favorite series of knives made by Chicago Cutlery.

Wusthof is a family-owned knife manufacturer that’s been around for over 200 years, continuing to make some of the best German-made knives year after year.  They are one of the most popular Western-style knives you’ll find anywhere in the world.  They are all made in Solingen, Germany where they follow very strict quality standards.  Making sure they have a knife set for everybody, Wusthof makes a wide-variety of knives in several price ranges, however most will be at a higher price point than Chicago Cutlery due to the materials and manufacturing location.

Now for the best part, a compare and contrast between our favorite Chicago Cutlery and Wusthof knife sets…

There are a few reasons we chose these sets from the two brands being compared here.  First, they are just about as close in price point as you can get between their respective lineups. They also somewhat resemble each other and have similar builds.  Lastly, both are popular sets purchased online so there are tons of reviews for you to compare online! 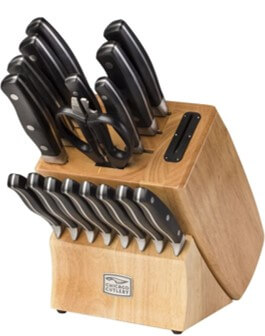 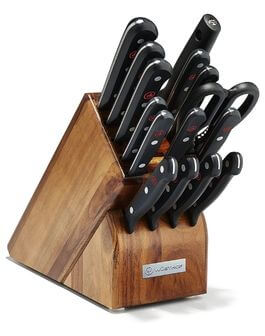 These are two well-known knife brands, but for different reasons.  Chicago Cutlery makes some great, affrodable knife options while Wusthof is a world-class knife maker that focuses on materials and build quality, and therefore demands a higher price.

The biggest similarity between these knives is their look.  Both have a classic look and come availabe for purchase in large sets.  Relative to other sets each brand makes, these are an affordable option, but that’s where the similarities end.

There are several differences between these two knife sets.  They are listed below:

Both knife sets compared above are very popular in their respective circles.  Chicago Cutlery’s Insignia II is a great value and won’t break the bank.  You get a good knife at a very fair price.  By contrast, the Wusthof Gourmet knife set listed above is pricier, but it’s a well-built knife that will stay sharp for a very long time!