After seeing them advertised EVERYWHERE lately, we decided to provide BladeAdvisor readers with a Forged in Fire knife review.  Everyone’s been asking us, “Are they any good?”, and this is the best way to share our opinion in detail.  The first thing most people think of when we see a commercial like this one (see below) is always “gimmick”.   But, rather than jumping to conclusions, we need to actually take a look at the knives, the materials and the build quality to give the knives a fair shot.

For those who haven’t seen it, here’s the commercial we’re talking about…

As you may know, “Forged in Fire” is a TV show on this History Channel where 4 bladesmiths compete for a $10,000 prize based on the judges’ pick of who makes the best blade (knife, sword, axe, or whatever that episode’s competition is about).

We can’t help but feel there’s an insinuation that the knives offered in the commercial are the best knives in the world.  And, by extension as good or better than those forged right there on the television show.

These knives are often being offered for less than $20-$30 per knife!  Any of our regular readers know that most good knives cost much more than that

Forged in Fire Knives:  Our Review

Let’s admit it, a flashy commercial with your knife slicing water bottles and chopping large blocks of ice doesn’t necessarily equate to a great knife in the kitchen.  To be sure it’s any good or not, we need to look at our core review criteria, which are the knife’s materials, build process, appearance, and price.  These are what makes up a good knife, not hype!  Let’s take a look at their two-knife set that includes a chef’s knife and a paring knife.

At first glance, these knives do appear to be attractive.  They have a hammered and polished steel blade and what looks to be some sort of a triple-riveted, wooden handle.  However, upon further inspection, it actually appears that the handle are made with inexpensive ABS plastic (darn!).   The good news… it is forged and triple-riveted which are two important features in a well-made knife.

We also noticed that there is very little “heft” to the bolster of these knives, making the knives very lightweight.  While that can be a good thing if you don’t like heavy knives, it’s also a sign of a cheaper knife since there is less steel needed in the build.  Speaking of the build, it’s time to discuss the blade itself.  Unfortunately, all of the marketing materials only talk about it being “surgical corrosion resistant stainless steel”.  We’re guessing this is code for “not expensive steel”.  Knives that use high-end blade steels almost always advertise it.  It’s something that makes the knife both better performing, but also more expensive.

Another tip off telling us it’s probably less expensive steel is the price point.  This knife combo is regularly priced around $50 or less.  Many of the high-end knives we’ve reviewed on this site cost upwards of 3-4 times that by themselves.  I’m sure the Forged in Fire people are nice guys, but they aren’t just giving these knives away for free.  They’re inexpensive because of the cheaper materials used to manufacture it.

So to recap the basics:  The appearance of these knives are great, especially at this price-point.  These aren’t the greatest knives known to man, but no one’s asking you to pay hundreds of dollars per knife either.  The way the knives are built, AKA “forged”, is usually a mark of a good knife.  However, there’s a trade-off in this Forged in Fire chef knife set.  They used lower quality materials to be able to offer them to the public at a lower price.

So, what does that mean???  It means that if your’e a fan of the show, or just in the market for knives that look great but don’t cost a lot, these might be a good fit.  Just don’t actually expect them to be the best knives ever built!   To be fair, they don’t actually say this in the commercial.  What they say is, “it may be the last knife you’ll ever buy.”  I doubt it, but hey, technically it’s true.  It “may” be.

The Forged in Fire 50-yr Warranty

The Forged in Fire knives do carry a 50 year warranty.  This is much longer than the 1-yr average most brands cover cheaply made knives.  On the surface it sounds awesome!  Ultimately though, if you check the fine print of the warranty, like most others, it only covers manufacturing defects.  It doesn’t actually cover anything that is a result of abuse, mistreatment, or even accidental damage.  In fact, it states explicitly that it doesn’t even apply to minor cosmetic scratches as long as they don’t affect the performance.

So, while a 50-yr warrant sounds great, it kind of gimmicky.  The odds of you returning a knife under these warranty conditions after 1-yr is next to 0%.  Besides, most high-end knives made with good materials offer a lifetime warranty, so why only 50 yers? 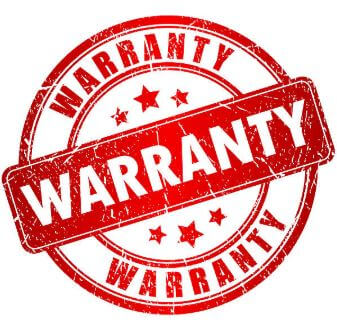 We hope we didn’t deter you from purchasing the Forged in Fire knives after reading our review.  Keep in mind that we review all types of knives here at BladeAdvisor, and when comparing these to a $200 chef’s knife, they aren’t in the same league.  But, that’s like comparing apples and oranages.  When analyzed against our list of Best Chef’s Knives Under $50, the Forged in Fire knife is comparable… and only about HALF THE PRICE!  Everything’s relative.

I think more than likely the consumers interested in these knives are fans of the show Forged in Fire.  Really it’s great that as a fan, you can sense a part of the show in the knives, especially after seeing the hyped up commercial!  This is a great set of inexpensive knives for families that aren’t going to spend $200 on a knife set.