Kamikoto makes Japanese knives are very popular among many world-class chefs from around the world.  Awesome right?  Of course, that’s just the notoriety that can make knives like these too expensive for the rest of us to buy!  Here in our Kamikoto knives review, we’ll discuss how good they are and if they’re really worth all that money.  And then, we’ll actually tell you how you can buy Kamikoto knives for pennies on the dollar when compared to their normal MSRP pricing!  Stay to the end to find out more.  You don’t want to miss this if you’re thinking about buying these knives.  You’ll literally save hundreds of dollars!

Headquartered in Tokoyo, Japan, the Kamikoto family set out to develop the world’s best single-bevel knives, made exclusively from Japanese steels.  To this day, their blade steel still comes from mills on Honshu Island.  Here steelmaking has been a tradition handed down for ever 800 years.

Kamikoto’s knives are each handmade with the intent to be crafted for chefs and knife enthusiasts to last a lifetime.  They choose only the highest quality materials and follow old-world, traditional techniques and processes.  The Kamikoto family has been in the knife making business for several generations since 1908.  They’ve even made Katana blades for the Japanese Navy at one point.

Today, Kamikoto knives are made in both Niigata, Japan and Yanjiang, China, two areas of the world that combined have thousands of years of experience in the blade-smithing of swords and knives alike.

Prior to 2017, Kamikoto offered their knife sets to consumers through retail outlets.  This is when they decided to take their product direct to consumer so they could both tell their story, and provide their fantastic product at a fraction of the price.  Where the MSRP of a knife set previously was roughly $1500-$2000, now you can pick up the same knives for just a few hundred bucks at Amazon. 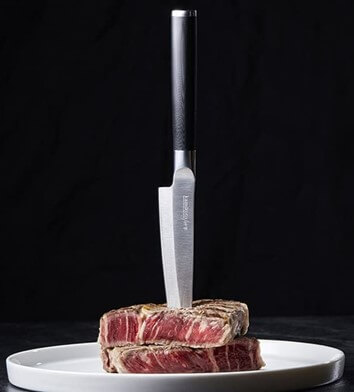 Kamikoto has some great knife sets.  Each of them comes with a beautiful wooden storage/gift box.  It makes a great presentation if you plan on gifting them to a friend or loved one.  They make great wedding or anniversary gifts!  Below, we review the top 3 best knife sets offered by Kamikoto as rated by their customers.  Take a look below to see what makes their knives so sought after by many Michelin star chefs.

But before we discuss each specific knife set, first let’s talk about the core principles of Kamikoto knives and what they’re all about.  Each Kamikoto knife is use using 100% Honshu steel, 420J2 steel for the Genten Series or SLD steel for the Ganjo Series.  The 420J2 steel gives the Genten Series blades an HRC of rough 53, while the SLD steel is significantly harder at 62 HRC, so these knives should retain their edge for quite some time.  This Ganjo knives while hard, are also brittle and can chip if not used correctly or properly maintained. 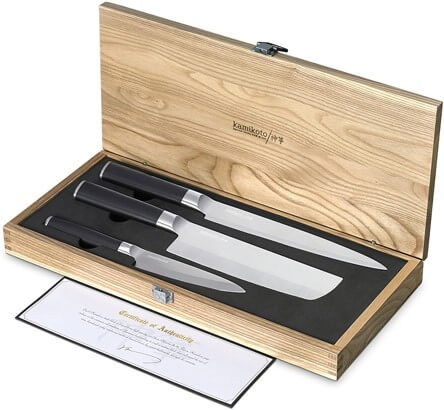 This 3-piece Kanpeki knife set from Kamikoto is their most popular, and part of the Genten series knives.  Each knife uses 420J2 steel, perfect for everyday home chefs.  Its a high-quality steel from Honshu, Japan and is the perfect mix between durability and corrosion resistance.

As mentioned above, these knives come well presented in a handcrafted natural-colored ash wood box.  The set includes three knives:  an 8.5-inch slicing knife, a 7-inch nakiri knife, and a 5-inch utility knife, all single-bevel knives for right-handed users only.  Each is precision balanced and weighted for optimal performance in your kitchen.

Before their split from selling in retail locations where mark-ups were high, Kamikoto used to have a $1295 MSRP on this knife set.  Many chefs happily paid that too because these knives are so great, but with today’s go-to-market strategy you can buy these knives through Amazon at just a small fraction of that original suggested retail price.  Chick the button below to check their current price. 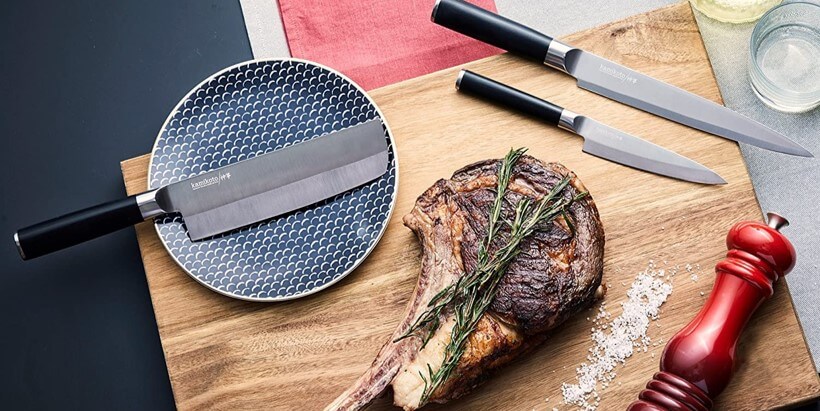 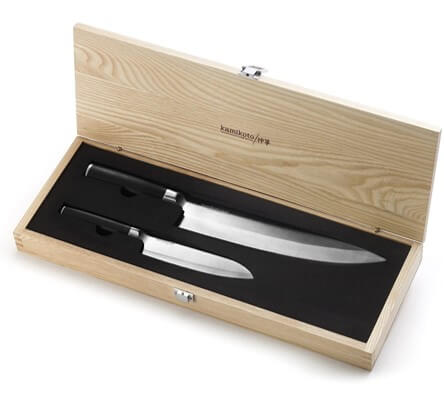 Kamikoto’s Senshi knife set includes two of the most important knives in your kitchen, a 10-inch chef’s knife and a 5.5-inch utility knife.  It also comes complete with a storage box to keep your knives safe if you chose not to keep them out and show them off.

The Senshi knife set is also part of the Genten series knives from Kamikoto, meaning they are made of the same awesome 420J2 Honshu Japanese steel as the Kanpeki knife set above.  Again, it is our opinion that this is the better of Kamikoto’s steels for home chefs.  While you certainly couldn’t go wrong by purchasing both of these sets, if you must choose between them, we feel this Senshi set is better suited fro those that prepare more Western-style foods and the Kanpeki set is better for those that prepare more Asian-inspired food.

Same deal as above… these were offered at an MSRP of $1375 when sold through their retail partners just a few years back.  Don’t fret at that high price thought.  You can pick them up for MUCH LESS now.  You can find the current price by clicking on the button below. 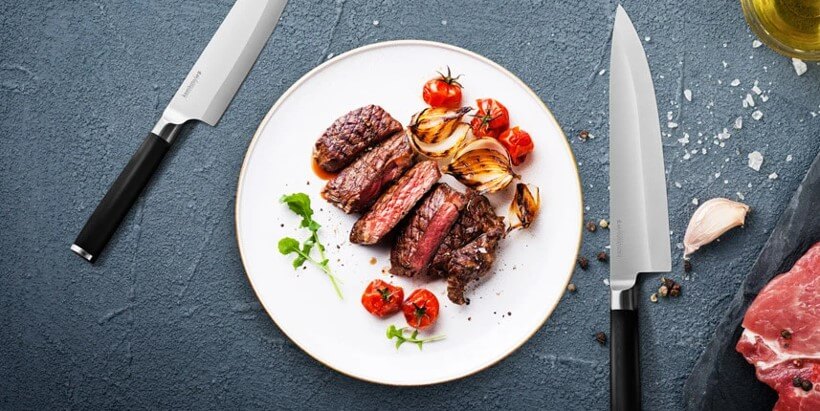 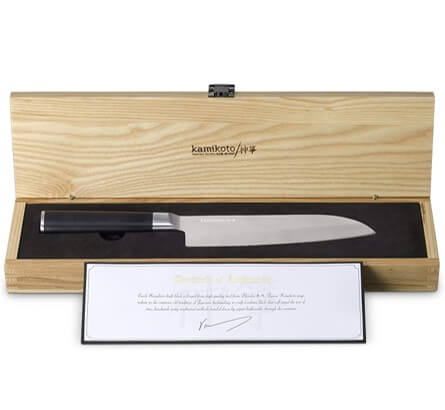 The last Kamikoto knife we reviewed their Santoku Genten.  Santoku knives, basically a Japanese chef’s knife, have become so popular in the past 5-10 years.  For those home chefs that already have all the knives they need in a set, this is a nice specialty knife that will really impress.  It’s also the perfect gift that’s not as pricey as buying one of the sets above if you’re looking for a relatively inexpensive gift.  As you can see, it comes with the storage/gift box.

This is less of a show-piece that the knives above.  This santoku is a work horse and is ready to get dirty in your kitchen.  The shape on this particular knife, a thicker spine and a slight curve, make it the perfect santoku for Americans.  We’ve all be trained to cut with a rocking motion on our chef’s knives.  Just keep in mind that this a traditional Japanese knife, and therefore is single-bevel (blade is only sharpened on one-side).  This means it won’t work well for left-handed chefs.

Reading through reviews on this knife, you’ll find that consumers think it has great balance, a super sharp blade, and is well-made.  They also think that Kamikoto knives made cooking at home MORE FUN!  Any when you see the price today when compared to the previous MSRP of $675, you’ll be thrilled at the potential savings. 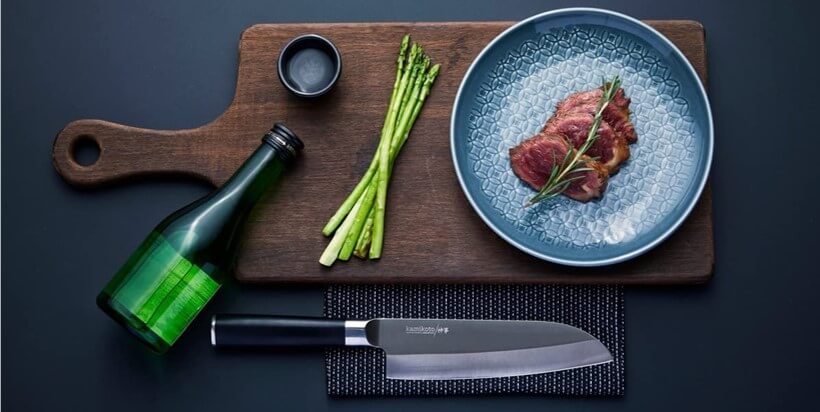 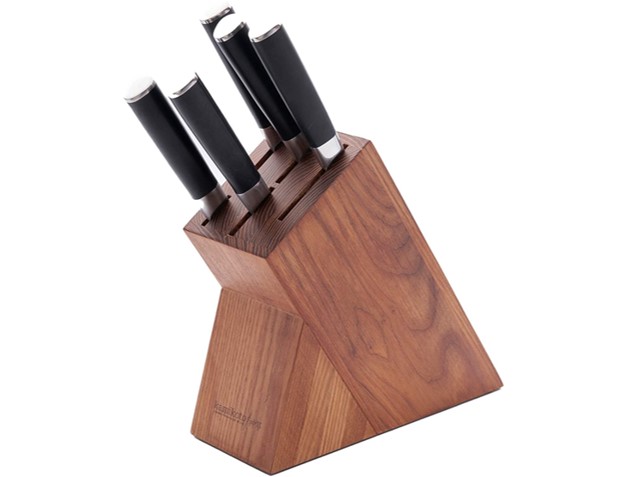 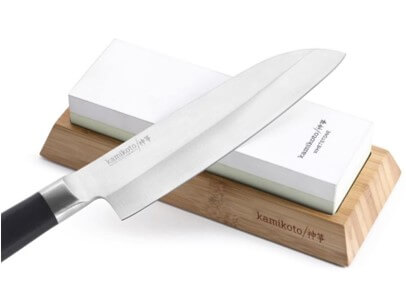 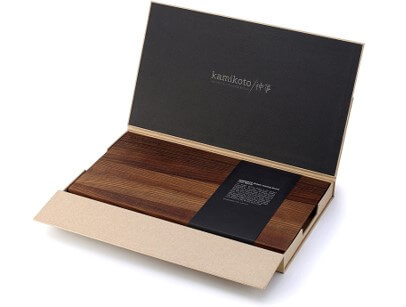 Every Kamikoto knife goes through their intense 19-step process before becoming a product that can be sold to a consumer.  It’s this attention to detail and the bladesmiths’ passion that makes these knives so sought after by some of the world’s top chefs.

Each craftsman is well versed in traditional methods and preserves the Japanese knife making legacy following these steps all the way through sharpening, polishing, and inspecting the blades (3 different times!).

That’s just the final steps though.  The real process starts a long time before that, perhaps years before.  First Kamikoto painstakingly only uses steel from the Japanese island of Honshu (from the perfectors of Niigata, Ibaraki , and Kanawawa, among others).  This ensures only the best base material.

Once in the factories, either Niigata, Japan or Yanjiang, China, the steel is strengthened and hardened in the Kamikoto forge at 1922 degrees-F for two hours, then further annealed for another two hours at 392 degrees-F.  Beside strengthening the blade, it also reduces flexibility and ensures great edge retention. 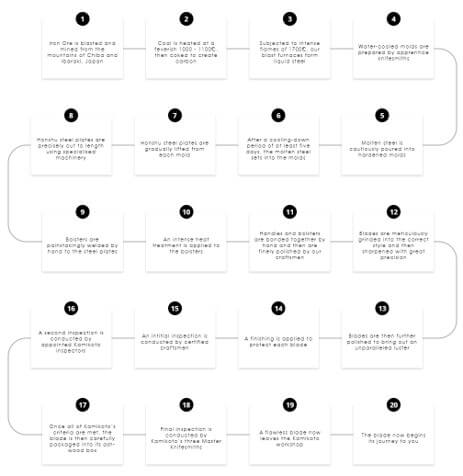 Caring For Your Kamikoto Knives

If you’re a knife enthusiast who’s been around high-end Japanese knives, than this is just a refresher.  To avoid damaging the blade, you should always steer clear from cutting bones, frozen items, seeds, and other extremely hard items.

NEVER put Kamikoto knives, or any good knife for that matter, in the dishwasher or let sit in the sink.  Good knives have more carbon in the steel and while they’re corrosion-resistant, can develop corrosion if not cared for.  They should always be immediately washed & dried by hand and not stacked up with other utensils.

It is strongly recommended by Kamikoto that their knives only be sharpened using a Japanese whetstone.  If you don’t have one, or are unsure where to get one, Kamikoto offers their own whetstone for purchase.

All Kamikoto knives carry a limited lifetime guarantee as you’d expect from a knife brand of this caliber, selling knives at this price.  Their knives are built-to-last, and they fully intend for them to last a lifetime.  Like most, their guarantee does not cover things like normal wear and tear, lost or stolen knives, or any knife that’s been improperly modified.  It’s put in place to protect you from manufacturing defects, which I doubt you’ll find with their 3-step inspection process before each knife leaves the door!

>> Click Here to See All Kamikoto Products at Amazon <<

Kamikoto is serious about their knives, and many top chefs swear by their quality.  Until just recently, they were priced out of most non-commercial kitchens as we’d never expect home chefs to pay so much for a set of 2 or 3 knives.  But great news!  They are now selling direct to consumers and have eliminated the middle-man markups that can be as much as 5-6 times the manufacturing cost after importers, wholesalers, and retail shops get their hands on them.

But that’s not the only reason to consider buying knives from Kamikoto.  We strongly encourage you to check out some of the previous buyer’s reviews when you’re purchasing products.  So many of them love their Kamikoto knives and wouldn’t trade them in for any others.