Yes, it’s true, Victorinox knives are made by the same company that brought us the Swiss Army Knife.  As you might have guessed, their kitchen cutlery division designs robust, useful knives at an affordable price.  And, whether you knew it or not, they’re actually some of the most commonly found in kitchens around the world, especially their cheap paring knives.

In most online reviews about Victorinox, you’ll see similar comments over and over; Victorinox knives are sturdy, low-maintenance, have great functionality, and are relatively inexpensive for what you get.  They aren’t the best kitchen knife available, but they’re a great value for the consumer.

Unlike many knife brands that we’ve covered here at BladeAdivsor, Victorinox knives are most commonly purchased by the individual knife rather than in a set, or block, of knives.  I think that’s mainly because it’s so easy to pick up whatever knife you need at the time without spending much money or even thinking about it.  Before you know it, you just have a bunch of Victorinox knives in your kitchen!

That’s not to say there aren’t any Victorinox knife sets because there are.  Here are reviews on our top 3 favorite sets… 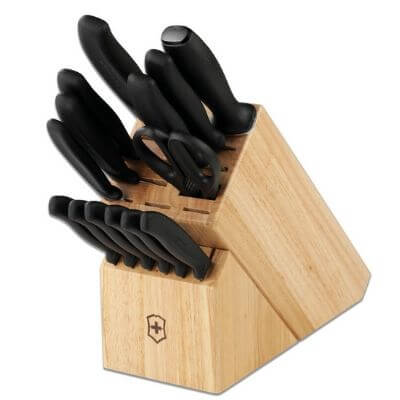 This is the best Victorinox knife set in our opinion.  This 15pc Swiss Classic set includes all the knives you’ll ever need in your kitchen.  And, since they’re dishwasher-safe with the Fibrox handles, they’re perfect for just about anyone.  This is a nice, complete set that also includes steak knives, saving you the hassle and cost of buying them separately.

The hardwood knife block is a nice touch and the included sharpening steel and kitchen shears make sure all of your kitchen cutting tasks are taken care of in one fell swoop. 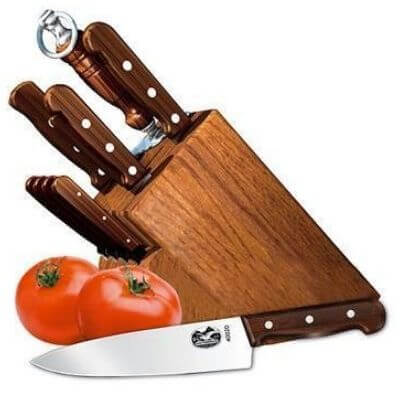 This is the most visually appealing of all the Victorinox knife sets available.  It has a very traditional look, yet still uses the same blades as the Fibrox series and follows Victorinox’s guiding priciples…great, durable knives at great prices.  One potential downside to this set however, is that you’ll want to hand-wash these knives to keep the wood handles fresh and in good condition. 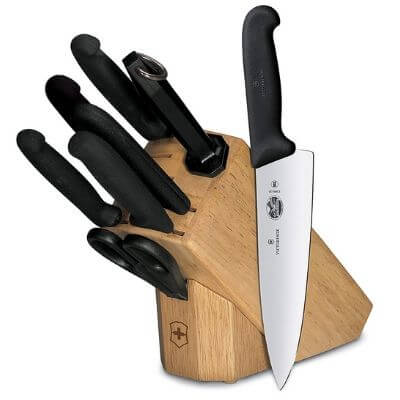 This Fibrox set by Victorinox is smaller and contains less knives than the others and really isn’t much less expensive, thus the reason it wasn’t our top pick.  Ultimately though, if this matches the knives you’re looking for in your kitchen, it’s still not a bad buy.  In fact, the knives on the whole are larger in this set than the others, so it has its place in the mix.

Another reason it’s not the best Victorinox knife set is because it lacks some of the smaller knives we’d like to see in a set (think utility knife) and also does not include a set of steak knives like most of the other Victorinox knife sets available.

There are five main cutlery collections made by Victorinox currently.  However, a couple of them are not as popular or common as the rest.  The top 3, our favorites anyway, cover the best in their lineup as well as what appears to be the most popular among consumers, so those are the collections that we’ve focused most of our efforts on.

Here are our Victorinox knife reviews, focusing on the difference between each collection and what makes each special. 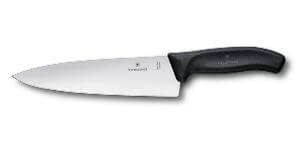 The Swiss Classic line-up has the widest variety for knife lovers.  Not only does this collection have knives of all shapes and sizes, it also comes in several different colors, including black, red, green, blue, yellow, pink, and orange.  Victorinox’s Swiss Classic line of knives is 100% Swiss-made, lightweight, and dishwasher-safe.  The blades are stamped and the handles made of Fibrox, a durable plastic material.

The Fibrox Collection (also sometimes called the Fibrox Pro Collection) is VERY similar to the Swiss Classic knives.  The subtle distinction is that this series was designed by professionals, for professionals.  The Victorinox Fibrox Pro knives are said to be more ergonomic and more comfortable in your hands.  While most of the knife is almost identical to the Classic, the handles are a slightly different shape and are marketed as “non-slip”.  We don’t notice much difference and feel like the difference is more a personal preference to the shape itself. 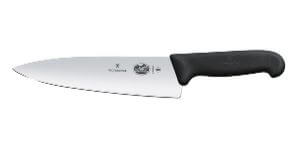 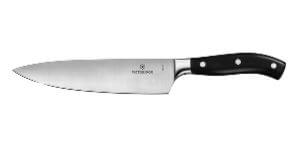 Perhaps not as popular as the less-expensive stamped knives (Swiss Classic and Fibrox Pro), the Grand Maitre are our favorite collection from Victorinox.  Their blades are forged from a single piece of steel and balance and performance are great with a full-tang design.  Consistent with their increase performance and longevity, the price tag on this collection is also higher as you might expect.

Another stamped -bladed knife by Victorinox, the Rosewood collection includes beautiful knives made with rosewood (hey where’d that name come from?) handles.  The only difference between the Rosewood knives and the Fibrox collection are the handles.  Most would agree that the rosewood handles look amazing, but it does mean you’ll need to hand-wash them if you want to keep the wooden handles in good condition for the long haul. 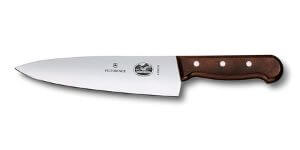 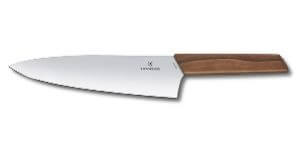 The Victorinox Swiss Modern knives are both elegant and unique.  This relatively new line-up of modern knives most commonly comes with warm European walnut wood handles, but can also be found with classic black handles, and even vibrant-colored synthetic handles.  Again, sticking with the common theme of durable, yet affordable, the Swiss Modern collection also uses a stamped blade and is Swiss-made.

One of the more commonly purchased types of kitchen knife that Victorinox makes is their steak knives.  There’s such a wide variety of steak knife sets that can be bought.  It’s quite amazing actually, and most of them have great customer reviews. 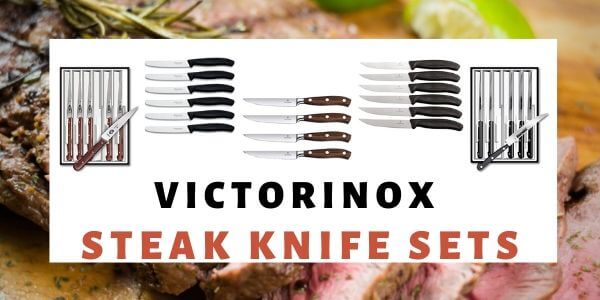 Victorinox as a brand was started back in 1884, so they’ve been around the block a few times!  The great-grandfather, Karl Elsener, of the current CEO, Carl Elsener, started the company with the novel idea of making highly functional, compact knives.  This is where the Swiss Army knife was born.  He went on to manufacture them for the Swiss officers and then as a sportsman’s knife.

As you’ve probably noticed reading the reviews above, Victorinox has stayed true to its principles throughout the years and within their kitchen cutlery.  Like all aspects of their business, their kitchen knives are function first.  Function over price, function over looks, and function over fancy.

What do we think about this???

We think it’s great!  If you don’t care about having fancy knives in your kitchen and are more concerned about functionality and the price tag, Victorinox knives are a perfect fit for you.  On the other hand, if you want the longest lasting, highest performing kitchen knives, these aren’t them.

Most of Victorinox’s kitchen knives are made of inexpensive stamped blades.  While functional and inexpensive for most home cooks, they do break eventually.  Often at the point where the thin blade meets the Fibrox handle.  So how do you make them last?  Keep them sharp!  A sharp knife requires the least amount of stress to make the cut.  Less stress, means longer life.

What happens when they break?  Don’t worry about it too much.  Individual Victorinox knives are readily available and inexpensive!