Cangshan vs Wusthof: A Comparison in Design, Materials, and Functionality

Cangshan vs. Wusthof…Both of these kitchen knife brands are well respected in the industry.  Wusthof has been around for over 200 years, and have always made their knives in Solingen, Germany, a city known for it’s knife making ability.  While Cangshan is a much younger company, it also manufactures its knives in a city well-known for knife making.  They are produced in Yangijiang, China where knives have been made for over 1000 years.

Below you’ll find some basic information on both brands for comparison purposes.  Following that, we have a head to head comparison between popular knife collections for each brand that are very similar in appearance.

Cangshan and Wusthof happen to both make knives that appear to be very similar as you’ll see in our comparison charts below.  Beyond appearances, they have many similarities, but are also many differences.

Cangshan focuses heavily on industrial design.  They produce beautiful kitchen knives that win design awards around the globe on a regular basis.  In fact, they currently have over 20 different collections for sale at Amazon.  Their knives are not only pleasing to the eye, but functional and all made from the same German Steel (X50CR15MoV).

On the other hand, Wusthof has always focused on functionality and performance first, but also makes some great looking knives.  Their traditional knife making techniques have been combined with modern technology to hit high quality standards.  While they have many fewer collections of knives at just 8, they also use a similar German Steel (X50CrMoV15) to Cangshan.

Clearly there are similarities between these brands, but many die-hard kitchen knife enthusiasts will tell you they are different.  They’ll tell you that while both use German Steel for their blades, Wusthof makes them traditionally in Germany and has been making them for many many more years than Cangshan.  Those same folks will tell you that a Chinese-made knife is just not the same quality as a German-made knife.

We think it’s unfair to make a blanket statement like that.  It’s a silly thing to say in generic terms really.  There are certainly some knives made in China that are better than some knives made in Germany.  That being said, Wusthof has an abundance of experience making German-style knives in Germany for over 200 years!  Cangshan definitely has less experience doing this and manufactures in China which also has less experience with such a thing.

Coincidence?  I’m not sure.  These 2 classical knives appear very similar in appearance and most features.  Both are great knives, popular, and available in sets that allow any chef to build out their kitchen knife collection at home or at work if you’re a professional.  Let’s break them down and discuss.

To view the chart below on mobile, you may need to turn your screen on its side. 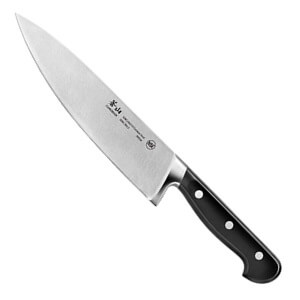 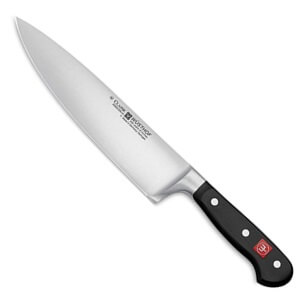 Two great knife collections from good brands.  Both are worthy of being in your home and kitchen.  Let’s dive deeper…

These knives look very similar and you can see that their specs are also similar, including the German Steel blades.  Rockwell hardness is the same, and both are forged and utilize a full boster.

The first, most glaring difference is the shape of the bolster.  The Cangshan V2 has an angled bolster that is said to be more natural for utilizing the standard pinch grip.  We think this is personal preference as many chefs have long said the Wusthof Classic is perfectly balanced and has a very comfortable bolster grip.  The angle on the V2 looks more aggressive though if that matters to you.

The other difference is hard to see in the images, but we feel that the handles on the Cangshan V2 look and feel much cheaper than the Wusthof Classic.  To be fair, it is a much less expensive knife!

So, which is the better knife between Cangshan’s V2 and Wusthof’s Classic?  We really like the Wusthof Classic Series knife and think it feels more substantial in our hands.  Its classic appeal is similar to the V2, but it carries the gravitas that comes with being made by one of the oldest family-owned knife makers in Germany.

Keeping all this in mind, the Cangshan V2 Series is at a considerably lower price-point and you can get beautiful knives for your home kitchen that look like the Wusthof Classics for less.