How To Dispose of Old Kitchen Knives Safely

There are many reasons you might need to dispose of an old kitchen knife, and you might be wondering how you do it safely.  Please don’t just throw them straight in the trash.  Someone could get seriously between the time you drop it in the trash can and the time it ends up in it’s final resting place, likely the dump somewhere.  All knives, even ones that are dull, are too sharp to just drop in a trash bin.  This is NOT an option for safe disposal.

The good new is there are a few different ways to get rid of knives properly, and which you ultimately decide on might have to do with why you’re getting rid of it in the first place.  The decision should be made by first identifying if the knife is broken beyond repair, if it just needs sharpened, or if you’re just getting new knives and the old ones are fine.

How To Dispose of Kitchen Knives Properly

Okay, so you’ve decided that it’s time to get rid of your old knives.  You can just trash them as you’ll be risking hurting yourself or someone else when they unsuspectingly reach for the trash bag and accidentally grab the blade… OUCH!

There are 4 good ways to properly dispose of any knife.  Let’s cover all the bases here.

Assuming the knife ins’t complete trash, you should first consider a donation.  You might feel like if the knife isn’t good enough for you that no one would want it.  You shouldn’t think this way.  For one, don’t you know the saying, “one man’s trash is another man’s treasure”?  You just never know who might be looking for what you’re about to throw out.  Besides most knives, even some in very bad condition, can be revived if you know what you’re doing and care to take the time.

A common question that pops up is, “Does goodwill accept knives as donations?”  The answer is YES, they do accept kitchen knives and other small knives, but not large sporting knives, machetes, or swords.  They don’t accept weapons of any kind.  If you’re unsure, just call ahead to your donation location before making the trip.  Most will accept all kitchen utensils.

If the knife is junk and no one in the right mind would take the time or effort to rehabilitate it back into shape, donating is probably out of the picture.  The next best thing would be to recycle it.  Most knives are made of stainless steel or carbon steel and at lease the blades are recyclable. You can search the link below to find one local to you that will accept knives, boom you’re done!  In fact, some recycle sites might even pay you for the scrap metal.

For the same reasons you can’t just throw a sharp knife right in the trash, please don’t attempt to drop it in your recycle bin, or any recycle bin for that matter.  It’s just not worth the possibility that someone could be hurt badly by not knowing what they’re dealing with just so you can dispose of an old knife. 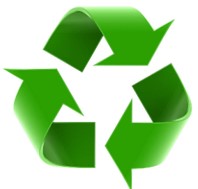 Take Your Knives To the Local Police Station

In many jurisdictions, local police departments have a process by which you can drop off your knives so the blades don’t get in the wrong hands or hurt someone.  Of course, your mileage may vary with this method since it’ll depend on your local station, but it’s worth a shot.

It’s always best if you can hand-over your kitchen knives to someone else who has the experience and a process for disposing of them.  Even if your local station doesn’t take them in, your police department might know someone locally that does take them, like a local knife sharpener or someone like that. 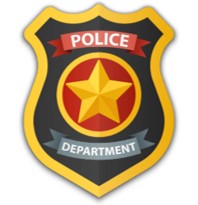 How To Dispose of Knives in the Trash

If all else fails and you can’t donate the knife or knives because of their condition, and you can’t find a local recycling facility that will accept the knife, it’s clearly destined for the trash.  Let’s just make sure you know how to dispose of knives properly and safely before throwing them in the trash.

There’s a right and a wrong way to do this.  You’re going to want to take newspaper and wrap the blade several times over.  Then, take a piece of cardboard longer than the blade by 2-inches and wider by 2-1/2 times the height of the blade.

Take the cardboard and bend it in half long ways.  Now, wrap it around the the newspaper-covered blade and squeeze it tight while covering everything in tape.  Make sure it’s wrapped tight so that it doesn’t slide off.  For the last layer, put everything in a box and tape it shut so that it won’t open back up.

Going to these lengths may seem extreme, but it’s necessary to greatly reduce the likelihood that anyone gets hurt by the sharp edge of the knife.

Any optional first step would be to consider holding the knife so the edge is against a cinder block and tap the spine to dull the knife.  Note, this would NOT negate the need for all of the other steps, and you need to be extremely careful not to hurt yourself while doing this.  It just helps ensure the blade isn’t as sharp before packaging it up for the garbage. 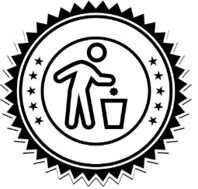 The absolute best thing you can do is to find a way to physically hand your knives over to someone else.  Whether it’s someone else that wants or needs them, someone who can safely scrap and recycle them, or if it’s just someone with experience or a safe process to dispose of knives.  We’ve offered you several great ideas for doing just this, so there should be no reason you need to dispose of them in the trash, which by the way, is our least favorite option.  It should be avoided at all costs, and that shouldn’t be hard.

We briefly mentioned it above, but another option could be a local knife sharpener.  Often, these guys are tinkerers that like to repair and rehabilitate old knives.  Sometimes it’s for the money, and sometimes just for fun. Either way, it’s another way for you to hand off your old, unwanted kitchen knives to someone that can use them rather than putting them in the trash.